The company’s self-contained system uses the natural forces of the ocean to passively catch and collect plastic from the infamous Great Pacific Garbage Patch, the largest accumulation of plastic in the world’s oceans.

Launched from San Francisco in September 2018, the company’s first attempt at it’s mission to rid the world’s oceans of plastic was deemed a failure by many after an 18 metre section became detached from the system and it was forced to return for repairs and upgrades.

But after launching from Vancouver in June this year, it seems the upgraded System 001/B is proving the concept behind the company’s ambitious goal.

“After beginning this journey seven years ago, this first year of testing in the unforgivable environment of the high seas strongly indicates that our vision is attainable and that the beginning of our mission to rid the ocean of plastic garbage, which has accumulated for decades, is within our sights,” said Boyan Slat, Founder and CEO of The Ocean Cleanup.

“Our team has remained steadfast in its determination to solve immense technical challenges to arrive at this point. Though we still have much more work to do, I am eternally grateful for the team’s commitment and dedication to the mission and look forward to continuing to the next phase of development.”

What Did They Change?

System 001/B has been trialling two primary modifications to the system.

The first was a parachute sea anchor that was added to correct the “inconsistent speed difference between the system and the plastic” allowing for “faster-moving plastic debris to float into the system.”

This solution led to much more plastic “overtopping” – where the plastic goes over the top of the system. This was solved by increasing the size of the cork line while the system was still offshore, which means “minimal overtopping is now being observed.”

Despite this success, we’re still a long way off of the system being fully operational.

The company will now begin working on its next version – System 002 – which will be “a full-scale cleanup system that is able to both endure and retain the collected plastic for long periods of time.”

But despite the promising results behind The Ocean Cleanup’s modified system, there’s still a long way to go before there’s meaningful progress in reducing the amount of plastic in the world’s oceans.

The ambition to rid the ocean of plastic is a noble one – but it’s difficult to ignore the fact that it’s fixing a symptom and not addressing the cause of the problem.

Every year, the global population produces 275 million tonnes of plastic waste, of which approximately 3%, or 8 million tonnes, enters the oceans.

In fact, the chart below shows that of the 5800 million tonnes of primary plastic no longer in use, only 9 percent has been recycled since 1950. 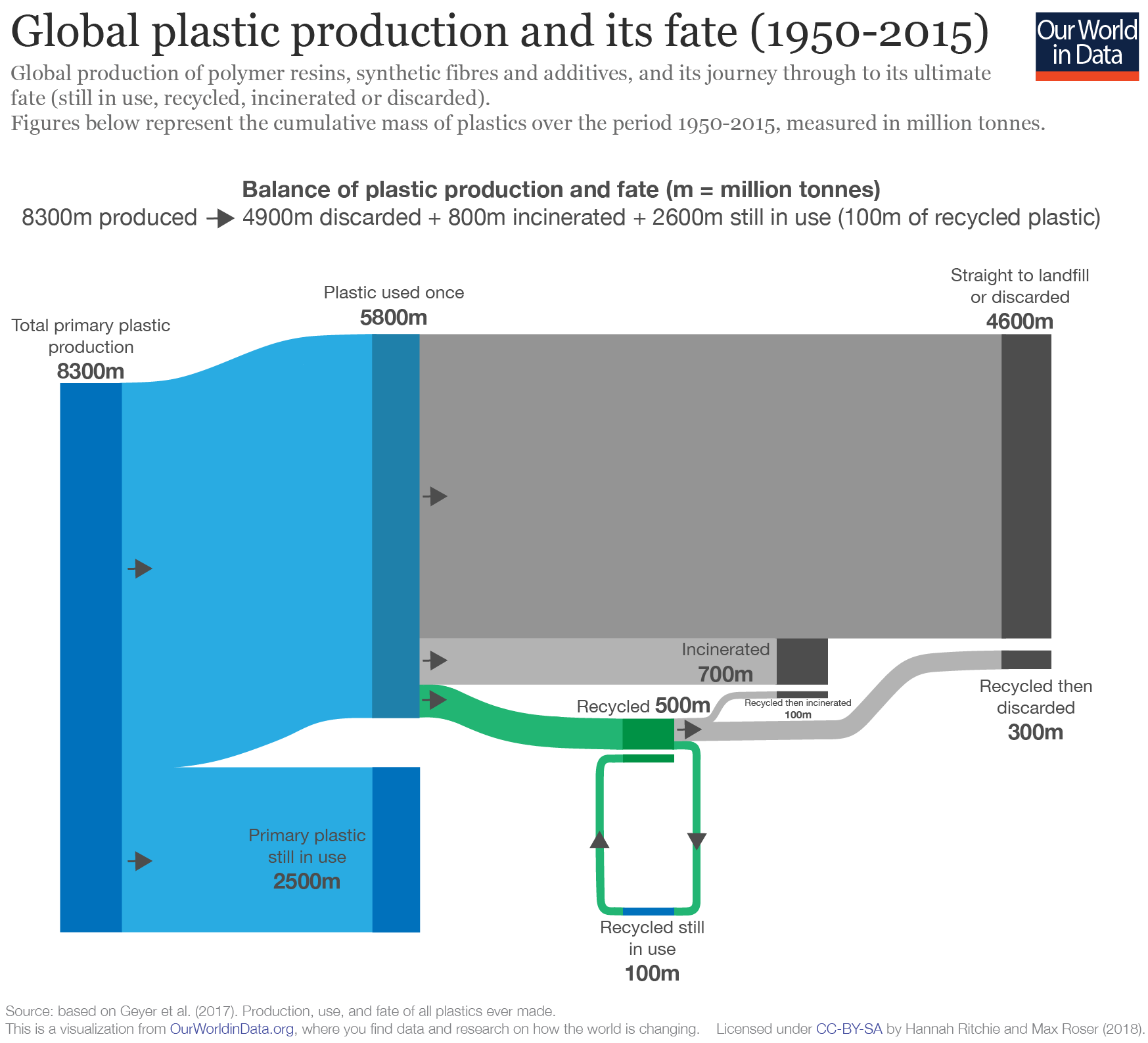 These figures show that our focus should not solely be in identifying ways in which we can retrieve plastic that enters the ocean, but must also focus on reducing the amount of plastic we use, and developing ways to safely and efficiently dispose of plastic in the future.

There’s still no way to recycle common daily-use items like toothpaste tubes, crisp packets and make-up removal pads; meaning every day millions of items are being disposed of – all of which have the potential to end up in the ocean.

Let’s hope that the world’s engineering community can come together to solve this problem, once and for all!